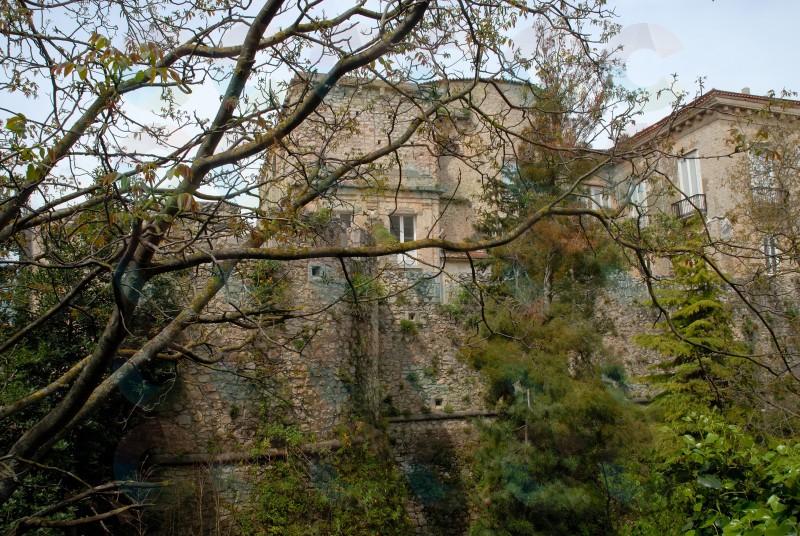 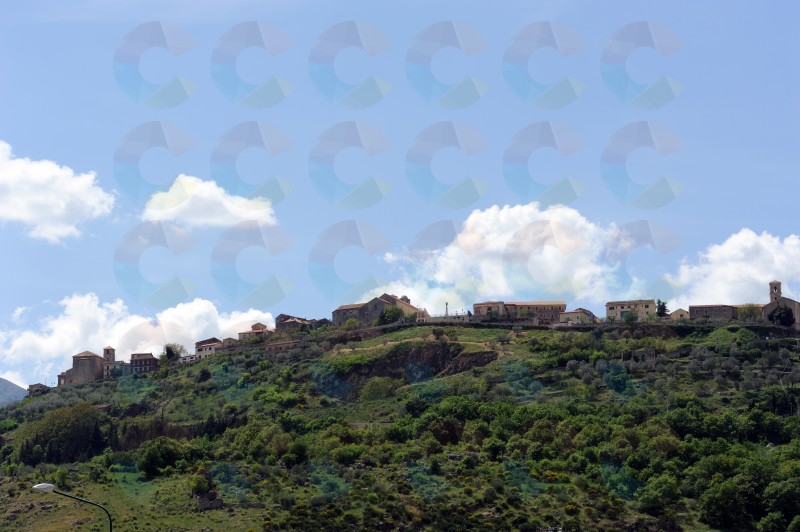 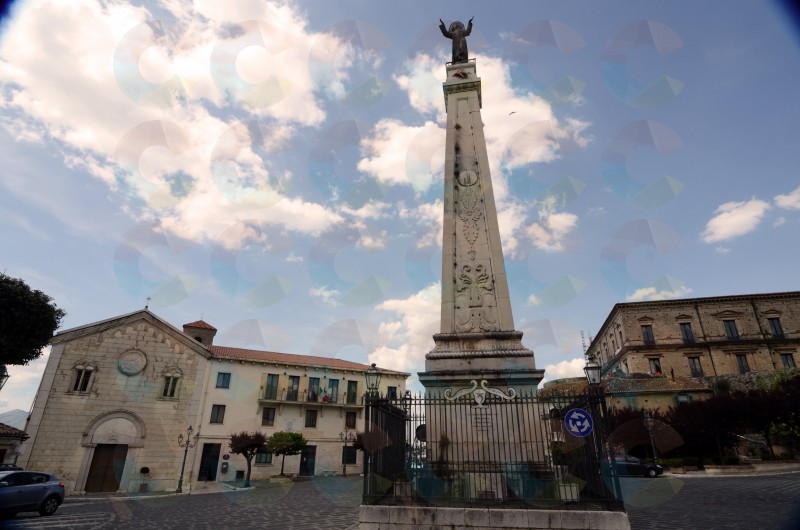 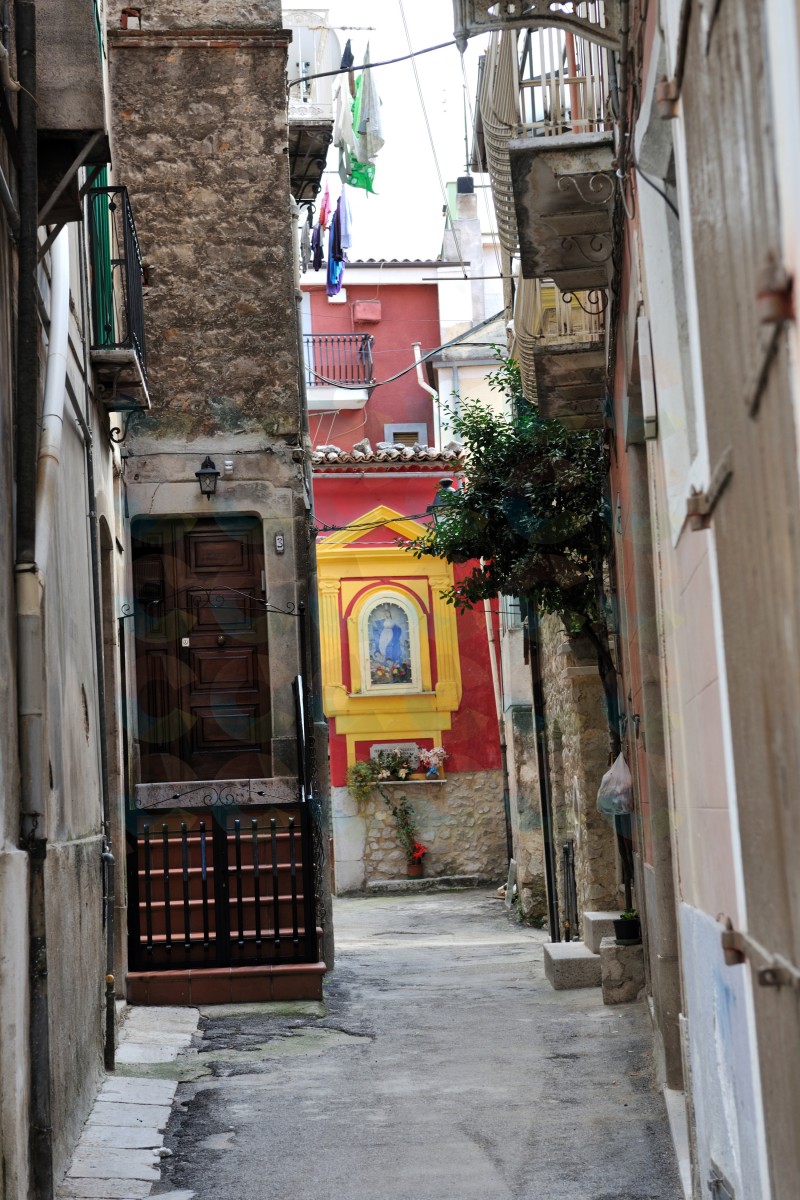 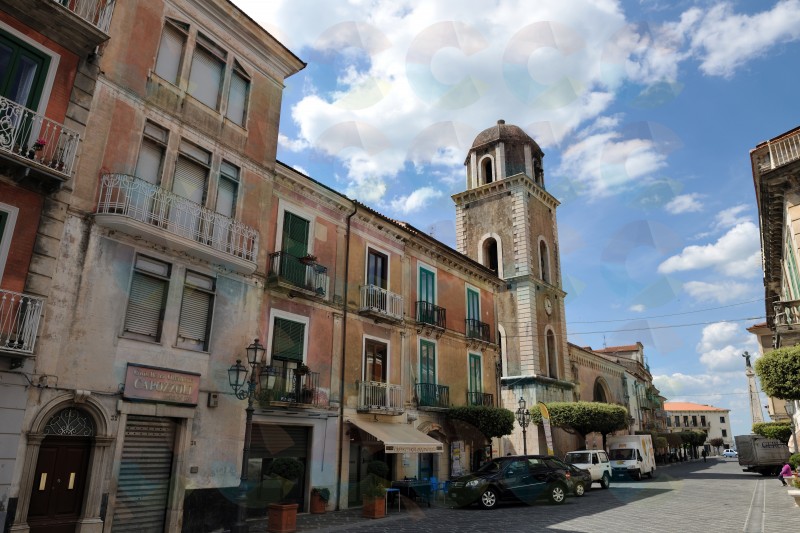 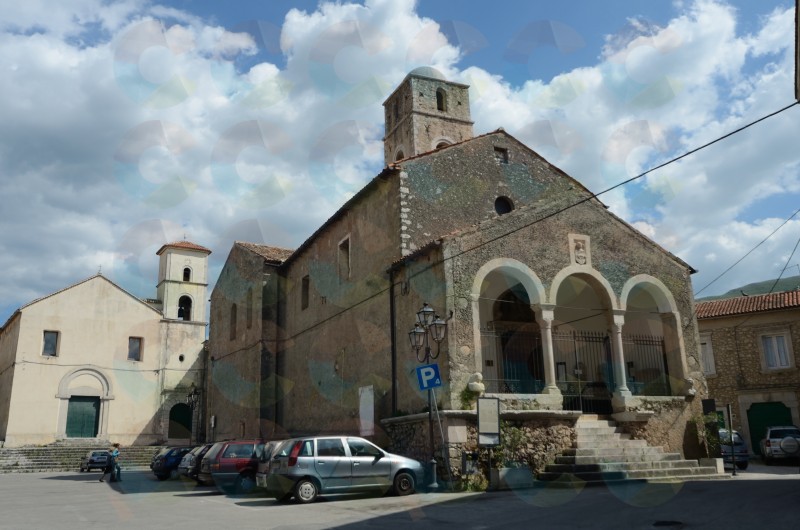 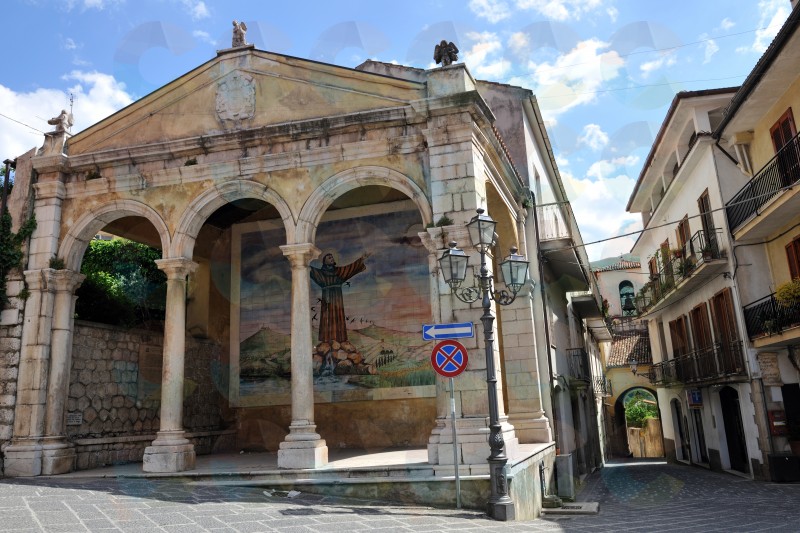 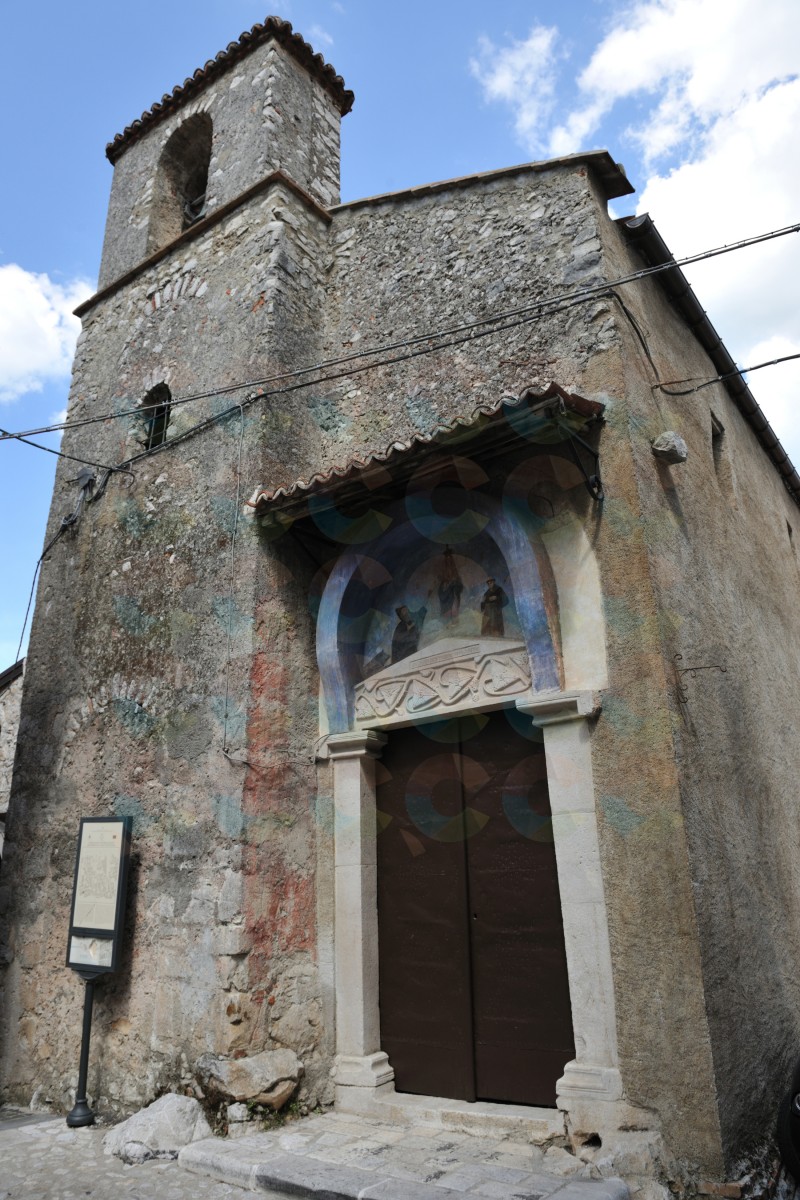 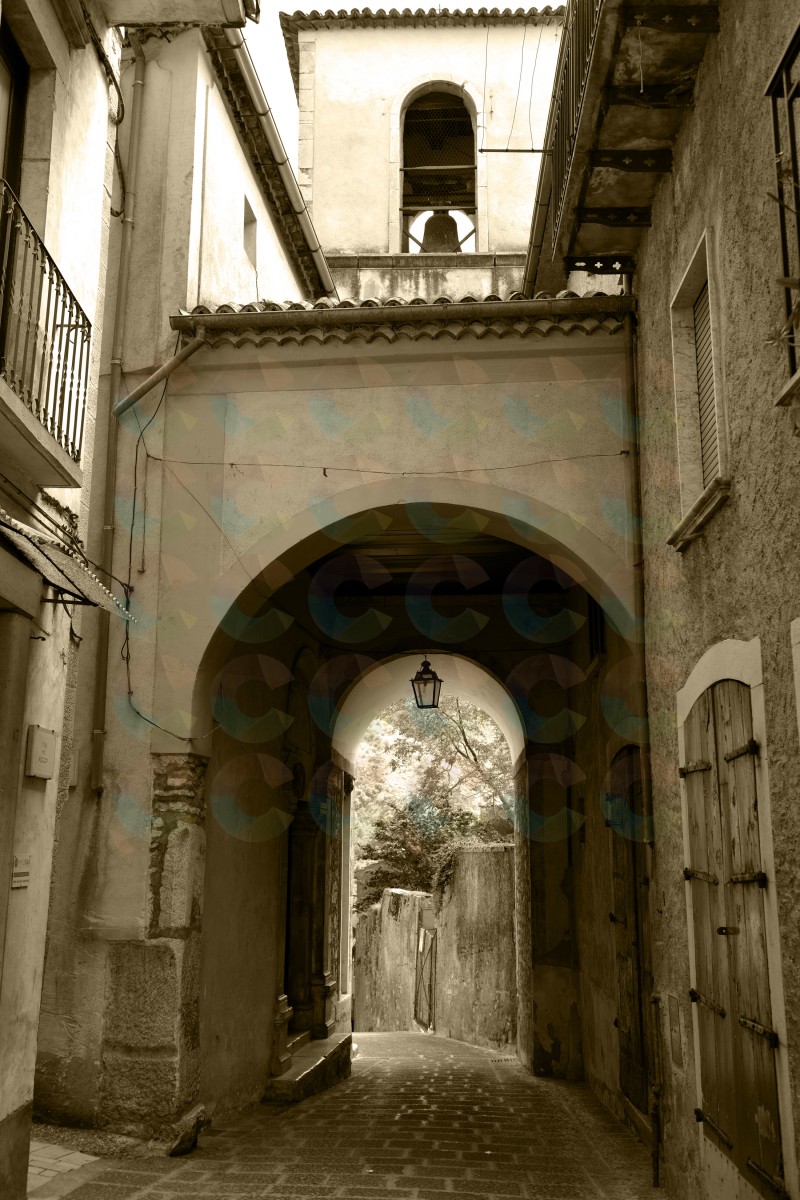 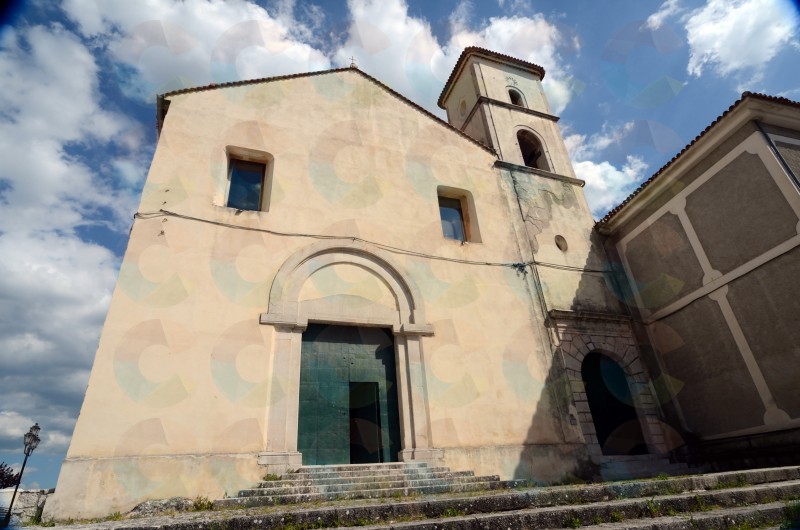 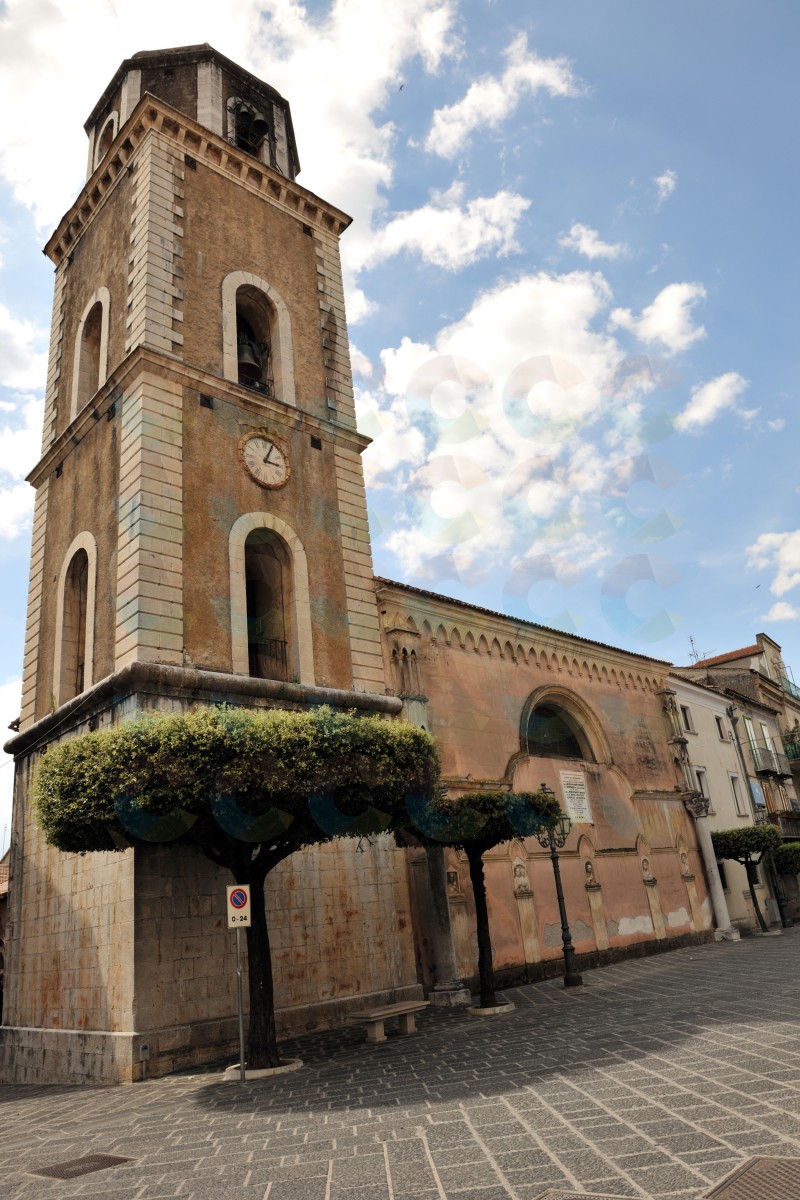 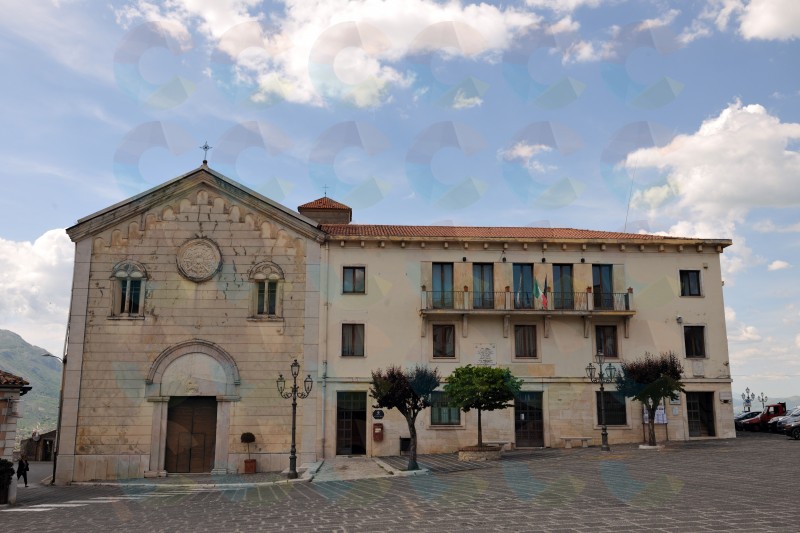 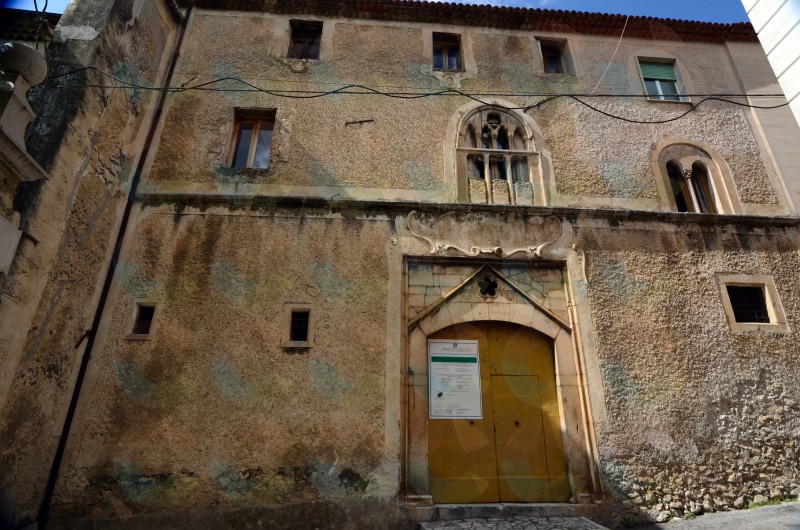 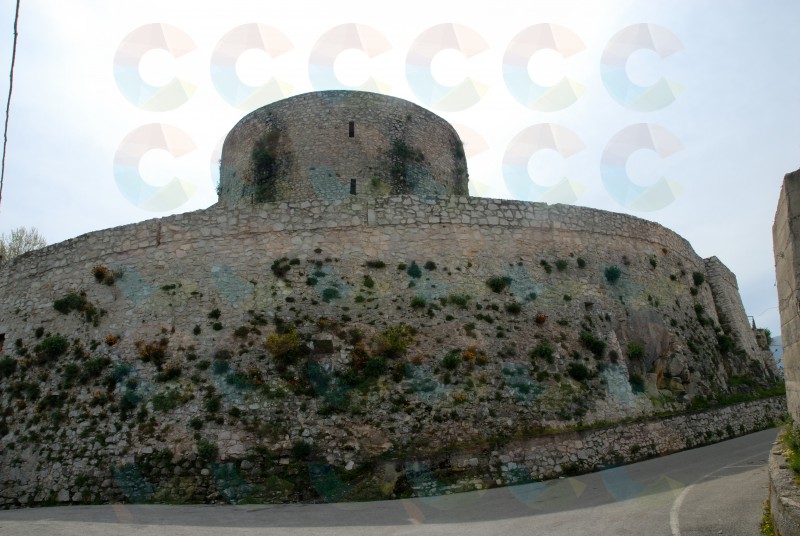 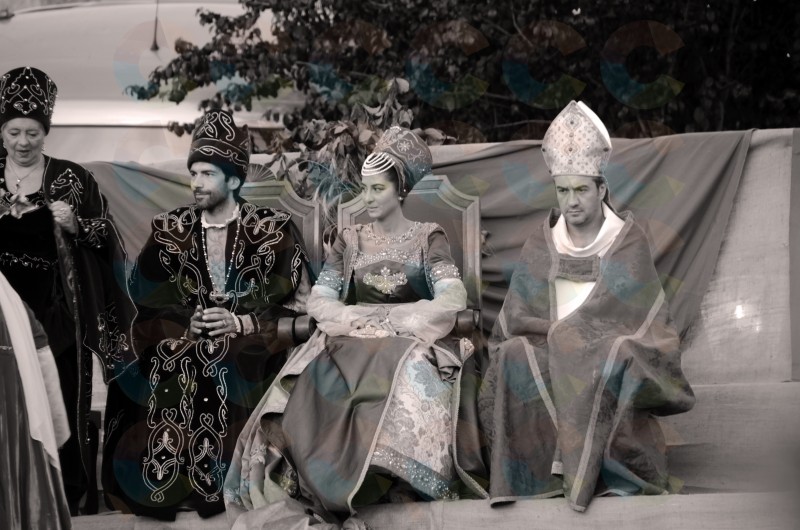 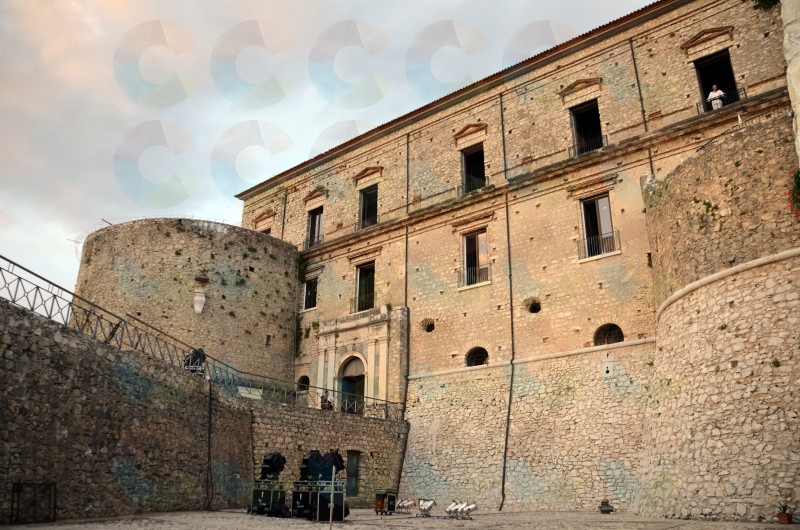 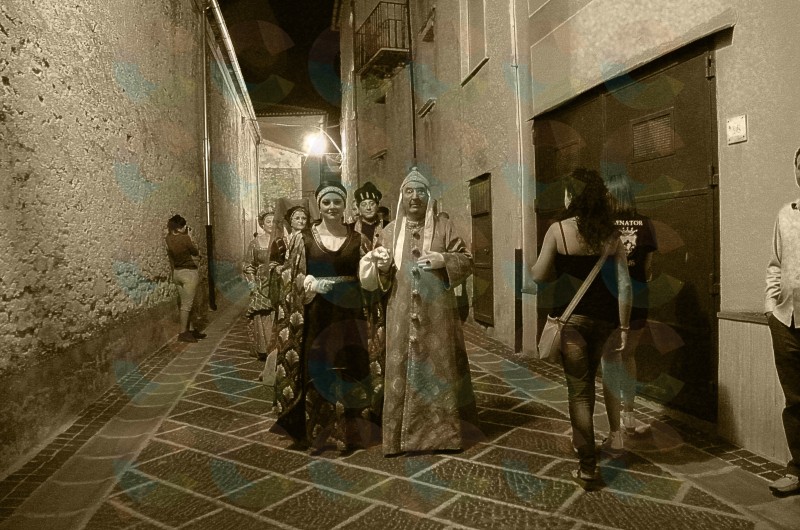 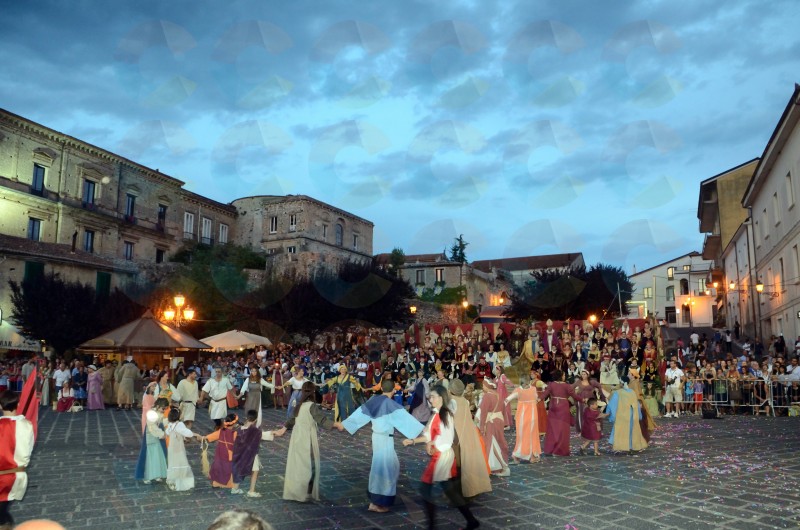 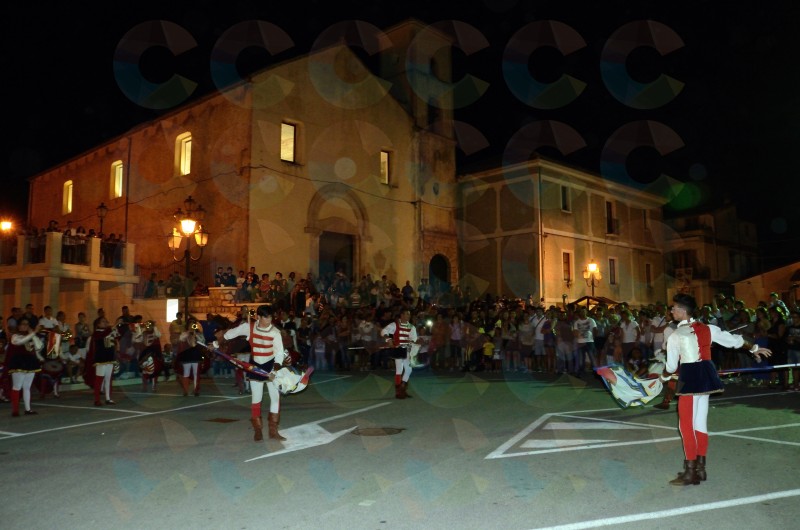 Many Lucan settlements already existed there in the early Iron Age and show the high level of culture reached by the people. We could recall the machined and painted ceramics that affected relations with the Puglia and with the cities of Ionian coast.

The Roman city (stele, inscriptions, ruins,a bridge over the river Buco, a tributary of Tanagro) apparently can be situated at the foot of the hill (S. Marco). However, near the cathedral is a walled column with figured capital that recalls those of the Italic temple of Paestum. Near the castle there are remains of the Roman walls (polygon). An inscription in the house of the Vettii says about the colony of Teggiano at the time of Nero. It should be remembered, between Athena and Teggiano, the «bridge of Silla ».

There was also a synagogue showing the existence of a Jewish settlement there.Racioppi doubts of Greek origin (Tegea, Tegyra) of Tegianum. Until the beginning of the fourth century the name is «Tegiano». That Diano is built on the ancient village of Teggiano had already argued the Mommsen. Scipione Ammirato writes that the «Valley of Diano is one of the most beautiful and fertile countries, and one of the most enjoyable for both adventure throughout the Kingdom of Naples. »Tradition says that the village was destroyed by Alaric (410) pushing towards Reggio and subsequently by Totila (542).

The oldest document that mentions «cibitate dianensi» is of 917. According to Ebner, it is a false for dating on parchment shaved of 1100.On February 917, John, son of Giaquinto, and Peter, son of Siconolfo, sold to another constituted Gentile, son of Cleric John, «una petia de terra, que abuimus infra cibitate dianense »for the defendant price« viginti tari aurei voni. » In the act drawn up by «nardus cleric et notarius» and signed by the deacon Sigismund and such Rolfredo is not mention of the presence of the court about contracts.

Document, in any case, is important because it tells us that the X (or twelfth) Diano was already designated as «cibitate ». However, it is certain the existence there of a «ecclesia S. Quirici» owned in December 1109 by Richard «Calinensium [Carinola] comes. » Important also all other documents kept in the «Sala diplomatic of Abbey of Cava, I mentioned elsewhere.

Another document also interesting is of the 1188. With it the bishop Michele of Paestum confirms to the clergy of the church of Santa Maria Maggiore of Diano 'et totius vallis »privileges granted by his predecessors bishops Alfano, «Celestuni» (Celestino), Giovanni, Leonardo and Arnolfo.The oldest and unpublished diploma informs us of the feudal lords of Diano of 1195.

With it the son of Godfrey of Hauteville, Count of captains (1101) and brother of Guiscardo, who had assumedthe name of won Philip Guarner, Count of Marsico and lord of Diano, sold public lands, located in the territory of the city of Diano properly in the Valley of Razzoni, relevant to church of St. Marcyan (forge false documents, to tell M. Galante), granary of Abbey of Cava. By Sylvester Garner then, the estates passed to his son William (or Goffredo?), From which to Sylvester (II, 1163).

From this then to William (II, 1180), from which to his son Philip. This was stripped of the county and the lordship of Diano for rebellion. He passed to Sanseverino. William (I) of Sanseverino, son of Henry (I), for marrying Isabella Garner (1167), daughter of William (III) Marsico, brother of Philip, then held the county and the «state» of Diano(Sassano, St. James, St. Peter the Tanagro, Rufus S. and S. Arsenio)«Maritali nomine» Only his son Thomas, became lord of Marsico and the city and «state» of Diano. All goods that were then reverted to the tax authorities by Frederick II and then returned (Sanseverino and barony of Cilento) by Pope Innocent IV to the only survivor, the seventeen year old Ruggiero (II), which it apparently seems she had first married the granddaughter, daughter ofthe Count Fieschi. Is certain that he married Theodora Aquinas, a sister of St. Thomas.

Ruggiero, who was also invested in other assets confiscated, having imprisoned at Salerno some barons, afraid of his guilty by King Manfredi fled to Charles of Anjou, conquered the Kingdom, also invested in the barony of Diano.In September 1261 was found the body of blessed Cone from Diano, novice of the monastery of Cadossa. Cone was born in Diano in 1100 where he apparently had attended the church of Annunziata and that was then received as a novice by Abbot Costa in Monastery of Cadossa. There arose a dispute between Diano and Montesano about attribution of the relics.In 1271 is an ordinance regarding the families of the village of S. Marzano, at Diano, vassals of Thomas Sanseverino, knight, eldest son of the Earl of Marsico.In 1291 Thomas Sanseverino had purchased Centola, Polla and Cuccaro, in 1294 Sanza, in 1295 Athena, Postiglione, Sala (consilina), S. Severino di Camerota, Casal Boni Ripari, Pantuliano, Castelluccio (Cosenza), Corbella, Monteforte (Cilento), Serre, Padula in 1301and Policastro in 1305.

He also confirmed baronies of Cilento, Diano, Lauria, s. Angelo a Fasanella and Magliano Vetere.In 1395 he confirmed the barony of Diano and S. Arsenio. Tommaso had married Margaret of Valdemonte of Ariano, which Enrico, Theodora and Margherita. For following Louis of Anjou, King Ladislao, occupied the Kingdom (1399), stripped the Sanseverino of their property including the «Diano » that was reduced to real state property. In 1404 he sentas «Castellano» Alessandro Lanner, ensures Mandelli, in the tower who had built later transformed into a royal fortress. The tower was then included in the castle built by King FerranteIt will cost 80,000 ducats.

The castle has a rectangular plan, resembles the Neapolitan Castelnuovo. It was restored by Giovanni.

Villano, third marquis of Polla. Diano was surrounded by walls with 25 towers and bulwarks.Thomas Sanseverino, married his second wife (1302), Swabian, Countess of Tricarico, from which had James, Gugliermo III, Noberto and Ruggiero (III). Henry (II) married Ilaria Lauria, daughter of the great admiral Roger (dowry 2,000 ounces of gold), from which Thomas (III) and Rugger. Succeeded Thomas (III): the grandfather was still alive when the father died (1314). Thomas married before Margaret of Noheris of Val di Piro, from which he had no heirs, and then the beautiful Margherita Clignetta Caiazzo, widow of Jamy Bourson Satriano, and had Antonio, Francesco then count of Lauria, and Luisa.

Took the feuds of Marsico, Sanseverino, Diano and the barony of Cilento), on January 11, 1417 Louis was soon appointed captain of those castles, he returned to the possession of Diano, Marsico and for Polla half of the doctors in law Gagliardo of Cava and Nicola RomanoSorrento.Thomas Sanseverino, the son of Louis, died without heirs, so the county of Marsico passed to John who married Joan Sanseverino who in 1463 owned the barony of Diano for some constraints. Ferrante granted (in 1463) to her the «omnimoda» jurisdiction of Diano, Sant'Arsenio and St. Peter. Giovanna was succeeded by her first son and, for the death of this man, then the second son Roberto who married Berardina del Balzo Orsini, daughter of Gabriel, Lord of Venosa. Roberto was the first prince of Salerno (1474).

He was succeeded by Antonello, who for rebellion (December 1485) against King Ferrante lost also the barony of Diano. King Ferrante gave the administration of goods of Sanseverino to Jacopo Serra. Antonello had married Costanza of Montefeltro, daughter of Frederick, Duke of Urbino. Took the goods, he lost them again, until he was reinstated in goods andoffice of Grand Admiral by King Frederick. In 1497 he left for Diano where he stayed two months to fortify the castle. Entered again in war against the Aragon, he took refuge in Diano where resisted long, despite furious attacks (9 and 17 November 1497).

On 15 December, with the help of the Great Captain Consalvo of Cordova Castle, he capitulated. Antonello saved his life with her, but he revert all goods. He died in Senigallia, forty, on January 27, 1499.In 1506 Roberto (II) obtained from the king the return of all its goods including Diano. It has been said of the death of twenty-three Roberto in Agropoli on 2 November 1508. In April 1506 he married Marina of Aragon, daughter of the Duke Alfonso of Villahermosa. In early of 1507 was born the heir Ferrante, name given in honor of his uncle King of Spain. Ferrante married the young girl Isabella Villamari, daughter of Bernard, Count of Capaccio. Released by the United, he embarked at Termoli for Venice (27 November 1551) and from there passed to France. Meanwhile his wife Isabella gave proof of his courage and of his expertise in military operations against the Spaniards (1551), insurrection in Agropoli (1552) and Altavilla (1553). Ferrante died in Avignon, in his sixties, in 1568.

Meanwhile, the barony of Diano eventually get hold of the prince Stigliano (1557). In 1559 the Prince of Eboli, Don Rodrigo Gomez de Silva, obtained from Charles V the right of repurchase of the feud of Diano by the Prince of Stigliano. In 1567 by accessing an invitationthe king ceded the title of prince of Eboli to Marquis of Diano, obtained by Philip II, with that Duke of Eboli. In 1574 (2 September) that had Nicolo Grimaldi obtained the barony of Diano, with an instrument drawn up in the Court of Madrid had the right to dispose of his feuds, «tam in ultima voluntate quam inter vivos. » He gave way to Diano in favor of Merualdo with the title of Marquis. Nicolo Grimaldi in 1575 bought for Merualdo by King (d. 28,000) the jurisdiction of thethird civil cases, criminal and mixed of Diano limited to the domain of Diano, Montecorvino, Eboli,Agropoli, Rapolla and hamlets.

On October 30, 1592, at the request of creditors of Nicholas and Merualdo was assigned to Ottavio Albino to appoint per person (d. 62,000) and that Giulia, Marchioness of Brienza, which willrenounce in favor of the son G. Battista Caracciolo. This, in 1606, sold free the city of Diano and hamlets to John Villano, Marquis of Polla, with the fief of Petrone, and the other rights of «Scafa» of Sassano. G. Villano, in 1609, gave up for his namesake grandson, son of the elder brother, with all his hamlets. In 1625 the latter gave it up in favor of his brother F'rancesco. Lapsed entire family was bought by Costabile Column, Prince of Sonnino, who sold it then (in 1651) to the regent Charles Calà.

The title of Duke of Diano was granted (August 8, 1711) to Charles Calà (7 october 1758) and included the hamlets of Sant'Arsenio or Sant'Arziero, Sassano and St. James, as well as the criminal jurisdiction of San Rufo.

The title of marquis had been granted for the intermediate person of Brigida Spinola, his mother, Marchioness of Bamonte, widow of Marcellus Calà, who was the brother of the paternal ruler Charles D. Calà. To Carlo succeeded Joseph (December 25, 1783) and from this, by inheritance, grandson (28 September 1785) Bridget Calà Osorio.Giustiniani writes about the valley placed 66 miles from Naples and the plain20 miles long. He places the town 48 miles from Salerno with 4300 with farmers, shepherds and traders, indicating that the numbering was done with S. Rufo and other hamlets.

Our Lady of Assumption

Pisatura Festival from 13 to 15 july