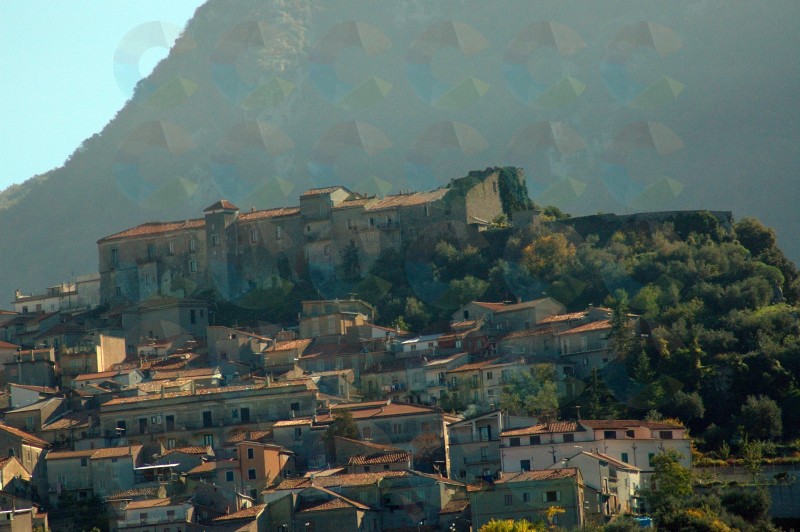 First news in a brebis of August 932: count Guido, sonby Guaimar I, Prince of Salerno, grants to Orso «qui fuit natibusgrecorum fines » a garden and a house in it built near «castellum de lauri », which had purchased by Neapolitans «qui vocantur calbusi ».

The document is interesting because it confirms the ubication of the fortified place with a new Tower, castrum, which did notnothing to do with « li lauri » simple town of Capaccio.

At the time of Gisulf I (~ 930-977) Prince, at the request of themother Gaitelgrima, besides grant forgiveness to uncle Landulf, who had tried to depose him, granted Countyof Laurino (perhaps had already been granted to the predicted Guido) with hisstrong Castle to his cousin Landenulf, d. during bridal journey from Tranito Salerno.

Following this, adhering to the prayers of his uncle, princegranted the County to another cousin, Landulf, elected then from father Landulf after the second conspiracy that ousted thePrince Gisulf. Eliminated, in their turn, the two Landulf from Pandolfo Capodiferro, at the beginning of a thousand, we find then Landolfo count of S. Agata and then monk at Montecassino, which tied allhis possessions. It is not news of other concessions of Laurinoafter the usurpation of the Principality by the two Landulf andtheir deposition.In store of Cava, among others regarding Laurino, include following documents: «de castello Laurine », where was «ecclesia sancti simeonis » is mentioned in a document of 1079, of land «ubi proprio a li lauri vocantur » is mentioned in a document of may 1092; from a donation July 1093we learn of Robert sonby Robert Guiscard, and of land near Laurino, in the locality called Water horses.

Other news from a document of 1109; from an unprecedented contribution that informs «monasterii sancti zacherie de li lauri » of the sale of their propertyin Lucania, including goods «ubi (...) li lauri dicitur », of sistersItta and Sighelgaita, daughters of the count Glorious of Pandolfo; and of thegovernor John said from Laurino. About the village is still news from a remission of litigation in February 1163 andother 30 scrolls.By Catalogus baronum, we learns of the local feudal lords to the time of King William, namely John judge of Laurino who had 26 slaves in Laurino and 8 in Diano whereby he was required to providefor the great expedition two soldiers.

By the documents we learn of “bagliva” of Laurino valued 5 gold ounces, 12 tarì and 4 and grain; of Riccardo, sonof Thomas judge and of the order once recovery 20 and 15 tarìfor 82 hidden fires. In 1270 King Charles ordered to the secrets ofPrincipality, of “Terra di Lavoro” e Abbruzzo, to match to «IohannisVetrensis clerici Salernitani ac rectoris ecclesiarum S. Martinide castro Laurini et sancte Marie de castro Sale > > the 10th part of goods of Laurino and Sala, as for the past. The February 26, 1277, King Charles granted to count Henry of Valdemonte, vicar in Tuscany, the County of Ariano and Paduli, inbeneventan area, along with Laurino in the Principality, in spite of the distance between the two feuds and its integration of the two economies.We have to remember that in those ages they tried to avoid the establishment of big «stati » politically not always controllable.

In setting the amountmonthly salaries payable to them, he ordered as well invite the University to choose « duobus viris fidelibus » charge to listen-in out of town to warn the garrisons ofCastle of approaching enemies. The August 11 of that year King Charles, having found that the population of Laurino kept remain faithful to his cause against the enemies, exonerated itany fee for 10 years.

Therefore he commissioned the Justiciar of the Principalityto leave, to every caution, to village authorities his letteroriginal. In 1315, was founded within the walls, the convent of St.Agostino da Giacomo, son of Thomas Sanseverino.

After the entry of King Alfonso toNaples, Americo was created (February 17, 1433) count of Capaccio and1st Baron of “Principato Citeriore”.The November 20, 1441 Americo defined the borders of «stato » ofLaurino by recognizing the rights of the population on some land andadding others. He married Margherita of Sanseverino, daughter of Luca, 6th count of Tricarico and Duke of San Marco.

He was succeeded by Gasparwho died, so the passage of property titles to his brother Antonello (married Giovanna Orsini de Balzo in 1469) who died without issue.He was succeeded by his brother William who took part in the conspiracy ofbarons. Rebels in 1487 to the Sanseverino was avocated County, butwere reinstated in their property with privilege of King Ferrante IIof August 15, 1496.

The restores was confirmed by Frederick of Ara-gona (30 ottobre9) and Ferdinand the Catholic (27 April and 7 may1506). Rebels still to Ferrante were confiscated goods from Ferdi-Nando Catholic (1551). The death without heirs of William S. _Severino, Earl of Northampton, to avoid that the fiefs were put intosale, Roberto asked and obtained by them together with BerardinoSanseverino of Bisignano. Robert touched Capaccio, Trentinara,Magliano, Laurino, Padula, Montesano, Casalnuovo, Sanza, Tortorella.

Towards the end of 1553 were offered for sale the fiefs of Ferrante Sanseverino, Fabio Carafa acquired the fief of Laurino (640 families) for ducats 11,300. In 1563, John Sanseverino, Carafa obtained from the Regent of r. Chamber of Summary, Francesco Revertera, the status of Laurino obtaining then the August 9, 1591 on Laurino,with Piaggine and the title of Duke and the predicate ofAquara, Castelluccia,

Forniello and Fogna (Villa Littorio).The title was passed on to the descendants until 1704 when VittorioCarafa successed his nephew Giuseppe Spinelli. Vincenzo Spi-nelli, for his father's succession Troiano (m. September 10, 1777) took overthe «stato » of Laurino.

The title went to Spinelli afterthe University of Laurino is freed from the burden of feudality. VincenzoSpinelli remained in possession of the other estates until the abolition of thefeudality.Surrounded by walls and towers and a castle at the highest pointthe hilly Cliff detached in the secondary by Monte dei cavalli,is perched Laurino, which came from three doors.

The Northern one, in whose interior was the arms of Sanseverino, was the door ofthe so-called “foro” and it was watched by two crenellated towers and the Western onecalled of the lame, of Curci or monks. The «stato » of Laurinoformed with the consent of King Ladislaus, had its final set-upwith the privilege of Americo di Sanseverino, who pointed out the boundaries.It consisted of Laurino and five hamlets, namely, Piaggine, LaurinoPiaggine, Laurino, Fogna or Fonga and two farmhouses missing: Zedalampe, near the Ripeti Valley, and Vito, possession ofthe italo-Greek Abbey of Grottaferrata, but belongingfirst to the Abbey of S. Maria di Grottaferrta di Rofrano and then ofthe monastery of St. Pietro al Tomussio of Montesano.

Of both these towns were still visible the ruins in the second half of' 700. It should be noted that to West was a building of local“Grancia” of St. Lorenzo di Padula, a House of a religiousof that monastery that had care of the Church with a single altar,then reduced to local store of the town, before its demolition in 1887. To Graduate was also a house forpilgrims and travellers which overlooking the Church of the Annunciata underwhose auspices was placed. We have to remember that to the left of the river Calore, more than two miles from Laurino, were ruins, still in ' 700,of a Benedictine monastery dedicated to St. Simeon.

In Laurino there were six parishes with the array of s. MariaMajor. By Volpi, you learn a lot about the latterChurch.Antonini writes that on an entire hill is the big land ofLaurino, which was home to many talented men, especiallythe famous p. Milensio (1568-1646 Theologos and Apostolic Nuncioin Germany), by Alessandro Egizio «bishop of Andria », withvery beautiful palaces, a collegiate church and a monastery of Friars «Franciscans, and another of women Nuns ».