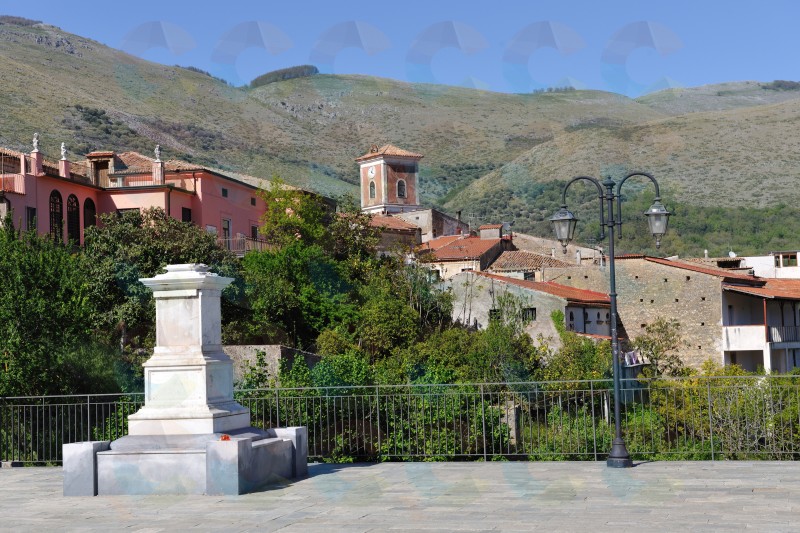 In 1804 Giustiniani signalled that the abbot of St. Nazario, local vicar of the Roman Chapter of St. Peter, practiced a certain Episcopal jurisdiction over that on the church of Hermits, also on those of S. Pietro of Licusati and St. Giovanni Bosco. There is a news, however, that among the « minoreses Abbatiae Basilianae, a S. Petri [it depended] Archimandritae S. Mariae de Crypta Ferrata in Tuscolano, apud Romam ». Missed sure news on the village, especially on the local chapels since Licusati was exempt from the jurisdiction of the bishop of Capaccio, note because subject to that of the Roman Chapter of St. Peter.

This up to 1979, when, Pietro Ebner had the unexpected possibility to publish the stage of the mobile and immovable goods, compiled in 1613, of the existing abbey of St. Pietro in the ADV, wise to which delay for all the particularities, land kind, inherent to the same abbey. This, already in 1480, had made to compile another document, of which it was copy in the file of the chapter of St. Peter of Rome. Just in the chapel of Pious Magno V, with a document of 1564, it was admitted the abbey of Licusati with its grancies: the abbey of St. Nicola Bosco, of St. Giovanni of Camerota and St. Cecilia, of St. Nazario, with all the notable of them dependences. Abbeys, at that times, all customary Greek and then trails to the Latin rite.

Naturally before of 1458, when for initiative of the cardinal Bessarione, protector of the order of St. Basilio, Callisto III submitted to the Atanasio Calkeopilo the « visitatio » of the 78 greek customary monasteries still existing at the South, among which only four in the territory in object. And that is the cenobis of St. Giovanni in Piro, of St. Cone of Camerota, of St. Mary of Centola and S. Maria of Pattano.

The property subject to the abbot of St. Peter of Licusati was distributed in the tenimentis of sixteen villages between the Bussento and the Alento. From the records of the Committee named by the Roman Chapter of St. Peter for the recognition of the goods of the abbey (months of May, June, August and November 1613), we notice, first of all, that the village, in that time, counted 684 inhabitants and that in the church there were the chapels of St. Mary of Chain.

There is also news of the church of St. Mark of Licusati. But, what is more interesting, there is a description of the church of Licusati and that is the «bona stabilia et demanialia dictae Abbatiae », from which the distance is also learned by the village: « The Abbatia foretold of St. Peter of Cosati is next to the Hamlet from around a quarter of mile". The abbey possessed, besides, a crusher of olives, « chapels, burials and good furniture ".Since the village was exempt from the Episcopalian jurisdiction of Policastro, Just by a document we can notice news on churches and local chapels. In the church there were « a chapel with altar and burial on the right. On the same side there is another altar and burials, which are of the Scipio Quintilliano and Nicola Tancredi. / In the other part, there is a Chapel without Altar and burial, and without painting, and it is of Giovanni Martino, other and of the family de Mauro.

«We have to remember that Thomas (IV) of Sanseverino had from the queen Margherita, vicaria of Charles of Hungary killed by a conspiracy, in 1386 over 365 gold ounces, a reduction of the tax from 800 to 500 gold ounces and other 85 ounces the year from the general subsidy of (Mercato) Sanseverino and Camerota. In the 1399 king Ladislao besides granting the 365 gold ounces that were corresponded to Luigi Sanseverino, confirmed him the feuds among which Camerota and Sanseverino of Camerota. As he notices, this last village belonged then to the principles Sanseverino of Salerno until it was not summoned for the note last rebellion. Licusati always followed the fates of Camerota. The actions of violence must also be remembered against the the feudal Marquis happened in Camerota on July 23 rd 1647 and 24 when they worsened for the « noise, tumult, brawls, and the death of Giovanni Battista of Rutolo of the hamlet of Licusati ».